The pharmaceutical industry is under enormous pressure to reduce supply chain costs, and Merck is making significant roads in this regard by joining the innovative Poseidon initiative.

Merck was founded in 1891 by George W. Merck, after the successful pharmacist emigrated to the United States. While in Germany, Merck had found success by pioneering the commercial manufacture of the pain killing opiate, morphine. Over the next 125 years, the company has continued to be at the forefront of medical innovation, discovering vitamin B1, and inventing the world's first measles vaccine and statins.

Cost containment is of prime concern in pharmaceutical supply chain and logistics industry discussions right now. Governmental pressure to reduce drug prices is considered a high priority, and one of the first things on the cost-cutting list are the expenses associated with transporting pharmaceutical products.

One effort to reduce supply chain costs has been to prioritize ocean freight over far more expensive air transport. For a long lime, airfreight has been the default setting for pharmaceutical supply chains. However, only around 15% of medical shipments are time sensitive - yet speed is the main selling point and higher cost justification of airfreight. There is also a temperature maintenance issue with airfreight - a factor of paramount importance to the pharmaceutical industry - with one company reporting temperature excursion problems on 80% of its air shipments.

It is this which has led Merck, along with Merz, Novartis, GSK, Allergan, Actelion, Roche, UCB, and GSKBio, to join the Poseidon program - an initiative designed to promote ocean freight as the default choice for temperature-controlled medical shipments.

"Many pharma companies are already using ocean freight, but for many it's still a toe-in-the-water exercise," said Pharma Supply Chain Consultant and Co-Founder of Poseidon, Alan Kennedy. "Although the huge cost-saving potential is a massive inducement, there has been some nervousness around issues such as insurance coverage and the cost of stock tie-up. The various upstream and downstream players in the pharma-logistics chain see major advantages in working more closely with pharma manufacturers. However, the move from air to sea represents a big step for most pharma companies."

Poseidon is aiming to increase use of ocean freight by promoting tighter integration of the supply chain across all the companies who have signed up to the initiative. By bringing supply chains together, the Poseidon program can offer an off-the-shelf, door-to-door, less-than-containerload service, which optimizes logistics partners to provide optimum value solutions.

Insurance and inventory concerns are also addressed by the program, with particular attention being paid to issues surrounding loss coverage for ocean shipments.

"This is related to a persistent misconception relating to the possibility of container loss at sea," said Kennedy. "The reality is that the incidence of container loss as a proportion of total container transits is infinitesimally low. Even allowing for catastrophic losses, there are less than 1,700 containers lost at sea each year, out of 120 million annual container shipments. Poseidon consignments are being backed by a comprehensive end-to-end insurance scheme providing full-value indemnity in the event of an insured loss."

The Poseidon pilot project was launched in February 2018, and many companies, including Merck, have already signed up. It remains to be seen how successful the initiative will be. Kennedy expects more companies - both large and small - will soon sign up, but are waiting to see how the initial proof of concept plays out before taking the plunge for themselves.

"This pilot will constitute a large-scale process-validation, involving the intercontinental transportation and rigorous monitoring of multiple test reefers containing different pharma products and different protection permutations," he said. "The project, which is scheduled to be completed by the end of July, will provide Poseidon with unparalleled pharma ocean freight data."

Get The LogiPharma Conference Agenda 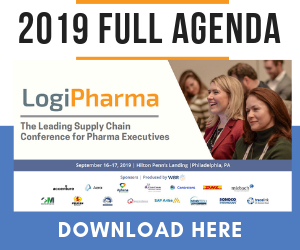 *Processing your payment may take a moment. Please click submit payment only once, and do not refresh this page. Doing so may result in your credit card being charged more than once.

We use cookies and similar technologies to recognize your visits and preferences, as well as to measure the effectiveness of campaigns and analyze traffic.
To learn more about cookies, including how to disable them, view our Cookie Policy